The Famicom Disk System is an interesting piece of hardware that I’ve been interested in buying for a long time, but have been a bit apprehensive about collecting for since the floppy disk format is rather fragile. Add in the fact that the disk drive itself often needs to be recalibrated and repaired because of the drive belt wearing out and that a lot of the disks for sale have been overwritten with other games over the years, and it’s a pretty hard sell for me.

But some years ago “loopy” created the FDSstick which is a drop-in replacement for the disk drive using flash memory rather than disks, meaning that you don’t need to rely on the fragile disks and drive anymore to play Disk System games on your Famicom. The only thing you need is the Famicom Disk System RAM adapter that actually contains all the hardware and you just plug in the FDSstick into that. So I recently bought myself a RAM adapter and an FDSstick, since both are rather cheap and I like to support cool new tech for oldschool systems.

However, there is another problem that people discovered with certain combinations of RAM adapters and Famicoms. These combinations can have issues with sprite artifacting, making the graphics really glitchy and in some cases the games become rather unplayable as a result. Here are some examples from the user Asparate on the Famicom World forums: 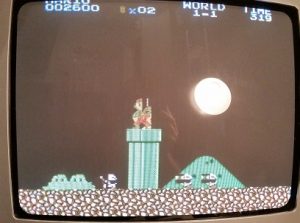 There were a lot of discussions about the reason behind this on various places like the nesdev and famicom world forums. Initially it was thought that it had something to do with the RAM chips themselves, but eventually it was discovered by Asparate that it was in fact due to the signals that were sent on the PRG data lines to the console becoming corrupted somehow.

The particular combination that have the issues seems to be Famicom consoles from around 1989, with the Famicom Family (FF) logo on the front, combined with RAM adapters with board number HVC-FMR-03. It also seems to happen with some HVC-FMR-02 revisions as well, but later revisions doesn’t seem to have the problem. In addition, these older revisions seem to work fine with older revisions of the Famicom for some reason.

So if you happen to have one of the affected RAM adapters, here’s a picture of the mod so you can perform it yourself, courtesy of FredJ on Famicom World: